Cardiff over Coffee interview with Cocorico 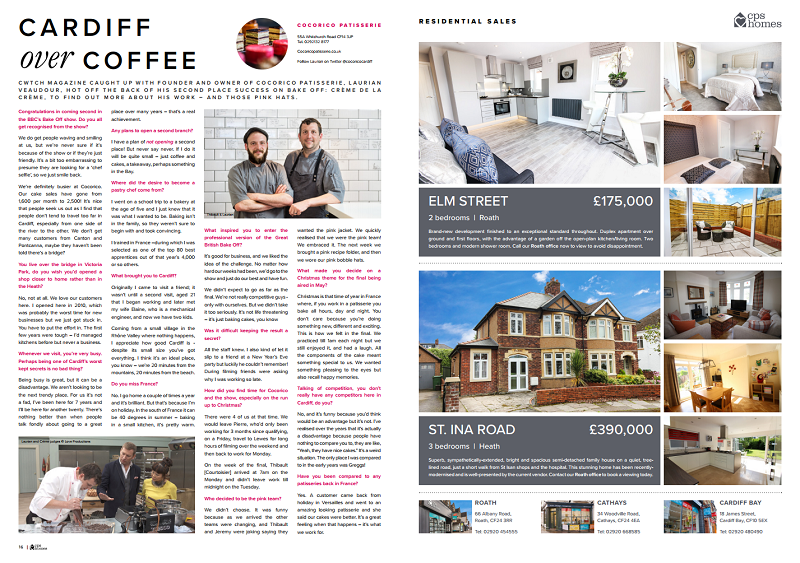 Cwtch magazine caught up with the founder and owner of Cocorico Patisserie, Laurian Veaudour, hot off the back of his second place success on Bake Off : Crème de la Crème, to find out more about his work - and those pink hats.

Congratulations in coming second in the BBC’s Bake Off show. Do you all get recognised from the show?

We do get people waving and smiling at us, but we’re never sure if it’s because of the show or if they’re just friendly. It’s a bit too embarrassing to presume they are looking for a ‘chef selfie’, so we just smile back.

We're definitely busier at Cocorico. Our cake sales have gone from 1,600 per month to 2,500! It’s nice that people seek us out as I find that people don’t tend to travel too far in Cardiff, especially from one side of the river to the other. We don’t get many customers from Canton and Pontcanna, maybe they haven’t been told there's a bridge?

You live over the bridge in Victoria Park, do you wish you’d opened a shop closer to home rather than in the Heath?

No, not at all. We love our customers here. I opened here in 2010, which was probably the worst time for new businesses but we just got stuck in. You have to put the effort in. The first few years were tough – I’d managed kitchens before but never a business

Whenever we visit, you’re very busy. Perhaps being one of Cardiff’s worst kept secrets is no bad thing?

Being busy is great, but it can be a disadvantage. We aren’t looking to be the next trendy place. For us it’s not a fad, I’ve been here for 7 years and I’ll be here for another twenty. There’s nothing better than when people talk fondly about going to a great place over many years – that’s a real achievement.

Any plans to open a second branch?

I have a plan of not opening a second place! But never say never. If I do it will be quite small – just coffee and cakes, a takeaway, perhaps something in the Bay.

Where did the desire to become a pastry chef come from?

I went on a school trip to a bakery at the age of five and I just knew that it was what I wanted to be. Baking isn’t in the family, so they weren’t sure to begin with and took convincing.

I trained in France - during which I was selected as one of the top 80 best apprentices out of that year’s 4,000 or so others.

What brought you to Cardiff?

Originally I came to visit a friend; it wasn’t until a second visit, aged 21 that I began working and later met my wife Elaine, who is a mechanical engineer, and now we have two kids.

Coming from a small village in the Rhône Valley where nothing happens, I appreciate how good Cardiff is - despite its small size you’ve got everything. I think it’s an ideal place, you know – we’re 20 minutes from the mountains, 20 minutes from the beach.

Do you miss France?

No. I go home a couple of times a year and it’s brilliant. But that’s because I’m on holiday. In the south of France it can be 40 degrees in summer – baking in a small kitchen, it’s pretty warm

What inspired you to enter the professional version of the Great British Bake Off?

It’s good for business, and we liked the idea of the challenge. No matter how hard our weeks had been, we’d go to the show and just do our best and have fun.

We didn’t expect to go as far as the final. We’re not really competitive guys - only with ourselves. But we didn’t take it too seriously. It’s not life threatening – it’s just baking cakes, you know

Was it difficult keeping the result a secret?

All the staff knew. I also kind of let it slip to a friend at a New Year’s Eve party but luckily he couldn’t remember! During filming friends were asking why I was working so late.

How did you find time for Cocorico and the show, especially on the run up to Christmas?

There were 4 of us at that time. We would leave Pierre, who’d only been working for 3 months since qualifying, on a Friday, travel to Lewes for long hours of filming over the weekend and then back to work for Monday.

On the week of the final, Thibault [Courtoisier] arrived at 7am on the Monday and didn’t leave work till midnight on the Tuesday.

Who decided to be the pink team?

We didn’t choose. It was funny because as we arrived the other teams were changing, and Thibault and Jeremy were joking saying they wanted the pink jacket. We quickly realised that we were the pink team! We embraced it. The next week we brought a pink recipe folder, and then we wore our pink bobble hats.

What made you decide on a Christmas theme for the final being aired in May?

Christmas is that time of year in France where, if you work in a patisserie, you bake all hours, day and night. You don’t care because you’re doing something new, different and exciting. This is how we felt in the final. We practised till 1am each night but we still enjoyed it, and had a laugh. All the components of the cake meant something special to us. We wanted something pleasing to the eyes but to also recall happy memories.

Talking of competition, you don’t really have any competitors here in Cardiff, do you?

No, and it’s funny because you’d think would be an advantage but it’s not. I’ve realised over the years that it’s actually a disadvantage because people have nothing to compare you to, they are like, “Yeah, they have nice cakes.” It’s a weird situation. The only place I was compared to in the early years was Greggs!

Have you been compared to any patisseries back in France?

Yes. A customer came back from holiday in Versailles and went to an amazing looking patisserie and she said our cakes were better. It’s a great feeling when that happens – it’s what we work for