"Landlords from across Wales and, indeed, the whole of the UK are furious with George Osborne," says Cardiff landlord, Sally Morse, who has been in buy-to-let for 20 years.

She is referring to the decision the Chancellor has described as simply “restricting tax relief” for landlords.

But while the Government may have made it sound innocuous, Sally says it will in fact bankrupt many landlords and make buy-to-let an unviable option for others. In a move that Sally has described as “bizarre”, George Osborne, by cutting tax relief is stopping landlords from offsetting the cost of their mortgages, a practice in keeping with all other businesses. As a result, she has been campaigning against the decision ever since it was announced.

The impact on landlord pockets

To help demonstrate the difference these changes are going to make to a landlord’s income, let’s take Jim, a higher rate 40% taxpayer and an owner of one buy-to-let property worth £200k, as an example.

Jim has a 75% loan-to-value mortgage with an interest rate of 4%, meaning he pays £6k per year in mortgage interest. His property brings in £10k per year (£833 per month) – a gross yield of 5% – and his general landlord costs including maintenance, safety certification and letting agent fees amount to £2k. Right now, all this results in a taxable profit of £2k, of which HMRC gets £800 (40% of £2k), while Jim retains £1,200. 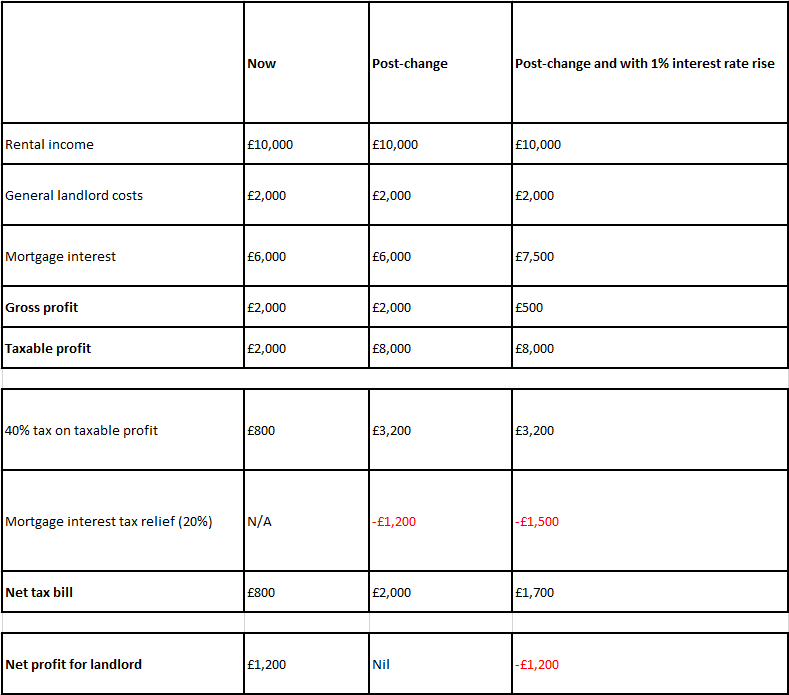 When the Government’s tax change is implemented fully, the picture will change greatly because Jim’s £6k mortgage interest payments will no longer be deducted from the rent in the calculation of his taxable profit. Suddenly, he owes £2k to HMRC, rather than the £800 he used to pay. This is because 40% of his new £8k taxable profit totals £3,200, less a 20% mortgage interest tax relief of £1,200 the Government have ‘kindly’ put in place for landlords. This means Jim makes no profit.

Finally, let’s throw a 1% rise in Jim’s mortgage interest rate into the mix, taking it to 5%. As you’ll see from the table above, instead of making the £1,200 net profit he does currently, he’ll now have to find the same amount in order to pay his tax bill. His buy-to-let venture has gone from earning him £1,200 per year to costing him £1,200 per year. 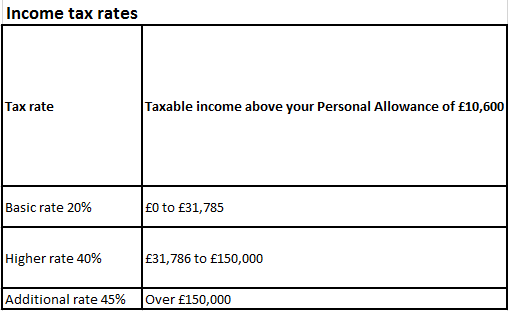 In Jim’s situation above, for example, the £6k he pays in mortgage interest is currently deducted in calculating his rental profit, but it will not be in the future. When you take into account what somebody might also earn from their standard 9-5 job, this £6k may be enough to tip them over the taxable income threshold between basic and higher rate taxpayers, which happens when the total taxable income exceeds £42,385.

Is it any wonder that Telegraph journalist, Richard Dyson, has called this the 'Alice in Wonderland tax’? He’s been campaigning against the ‘tax grab’ and his articles highlight the implications for landlords who have high mortgage interest payments.

What’s clear is that many landlords, including those who are ‘accidental’ landlords or have relocated for a new job but let out their old home, are going to be adversely affected.

If you’d like to know how the tax changes will affect you as a landlord, you can input your basic figures (rental income, mortgage interest payments, etc) via this handy calculator and view the result. When you open the spreadsheet, select the ‘Calculator’ tab – which is the last worksheet. Enter your own figures in the red cells, press Enter, and you will get the result.

In a bid to avoid the Chancellor’s changes, some larger landlords have looked into the possibility of holding their properties in a limited company. There are, however, various considerations to be made before doing this, such as stamp duty and mortgage fees – not to mention the potential for a similar, punitive tax regime on landlords in limited companies in the future. To work out if this is a viable option for you, it’s best to seek the advice of an accountant.

Feelings are running so high that a petition against the changes was launched at the beginning of August, which has already surpassed 30,000 signatures.

“Everyone who believes in justice should sign it because this tax is unfair, illogical and discriminatory, and it’s going to have a terrible impact on the private rented sector,” Sally says.

With the country’s top economists saying the idea is “plain wrong” (The Institute for Fiscal Studies) and “doesn't make sense” (The Institute of Economic Affairs), it remains to be seen how much expert opinion the Chancellor can ignore.

Sally is urging landlords and tenants to act now in a bid to try and reverse the Government's decision. As well as signing the petition, she suggests writing to both local MPs and newspapers.

“Everyone needs to stand up, be counted and make some noise to try and prevent this dreadful decision from going ahead. So many people, including MPs, don’t realise the implications, so please – visit them and explain it.”

These changes mean that now – more than ever – landlords must take steps to ensure they’re maximising the return from their investment(s).

If you’d like our opinion on what your property is worth in today’s rental market, or if you’re thinking of selling property, be it an apartment or a house as a result of this news, please contact Rhys Owen via 02920 668585 or rhys.owen@cpshomes.co.uk.