Back to the future, Cardiff style | CPS Homes

Back to the future, Cardiff style

As we reach the 30th anniversary of the blockbuster Back To The Future, we sent Christian Amodeo off in a DeLorean to find out what future Cardiff has in store.

It's hard to imagine just how much things have changed since 1985 - back then there was no Cardiff Bay, no Millennium Stadium, no Millennium Centre, no ice rink, no hover boards…

Actually, we still don't have a permanent ice rink (more on that later), and as for the lack of hover boards, this must be something of a disappointment to anyone whose eyes lit up when they saw Marty McFly jump aboard one when visiting the then distant year of 2015.

But here in Cardiff there's plenty to be grateful for. There's an air of excitement, a sense of momentum and trajectory about the place these days. A dynamic, young capital, Cardiff is set to undergo massive changes as it expands and key areas of the city centre experience major redevelopment.

Exciting times lie ahead for the Welsh capital, and its rising fortunes can only positively impact upon the rest of Wales, in particular what has become known as the Cardiff Capital Region. After all, the city is dependent on the 80,000 people who commute into Cardiff everyday, making up a full third of its workforce.

Cardiff is one of just two cities outside the south of England to feature in the 2015 top ten of 64 cities for population growth, and its population is expected to swell by a quarter to more than 400,000 over the next decade.

To accommodate the new Cardiffians, the largest expansion of the city since the 1960s is planned: 41,000 new homes before 2026. This will include 8,000 new homes built in Pontprennau, 7,500 in Pentrebane and 750 in Creigiau, with 40% of all the residential construction happening on green-field sites. 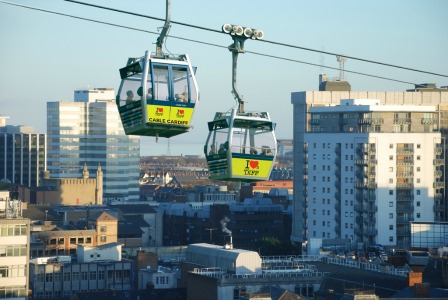 Growth will, of course, provide its own challenges, not least in terms of transport. Recent proposals for a £2 billion South Wales Metro network, which could be in place by 2030, recognise the importance of the city region.

A rather revolutionary recent development was the launch of Great Western Cities scheme, a city region plan consisting of Cardiff, Newport – and Bristol. Suddenly, us 'locals' must work together to compete. Cardiff and Bristol working together? Get away!

Yet another intelligent move was Cardiff joining the Core Cities Group, comprising ten cities that lobby for greater autonomy for UK regional hubs. And the creation of Cardiff Business Council (CBC), a private sector-led body working with the council and government alike (with offices in New York and Beijing on their way, apparently), to drive investment, is also welcome.

Most recently, CBC announced it had commissioned a feasibility study on cable cars for the city, which could be more effective than trams – symbolic of the city's ambition and some ‘outside the box’ thinking. A poor second to hover boards, perhaps, but a far better tourist attraction.

True, times remain hard as services face cuts due to a council budget cut, but, despite this, everywhere you look in Cardiff something new is popping up. Even the past is being updated – Wales' most popular heritage attraction, St Fagan's, is currently subject to a £25 million makeover of its visitor facilities.

Some may fear that, in this drive for modernity, Cardiff won't retain its sense of self. After all, it's vital to remember the past, and, if possible, preserve the good stuff (if only Cardiff's planners of the late 1960s and 1970s had done this). Here, we take a look at the major developments planned or underway.

All change at Cardiff Central station

The long overdue redevelopment of the bus station and adjacent land in front of Cardiff Central station will surely be welcomed by anyone who has been anywhere near Wood Street in the past 20 years.

As part of the "essential" one million square foot Central Square project between the station and Park Street, an £11 million transport hub will be built by 2017 where grim Marland House and the NCP car park currently are, creating "a world-class gateway into the city", in the words of Cardiff Council leader Phil Bale.

Excitingly, its atrium-like design – by Lord Norman Foster's architect firm – will allow the public to walk through it. It'll also contain 300 car spaces and 200 bike spaces. Work on the £50m structure should start this summer, with the BBC spending £100m on kitting it out before moving from its much larger Llandaff base in 2018.

Two further office blocks will sit between the BBC and the Taff. Well underway is the nine-storey 1 Central Square, 135,000 square feet of office space that will be finished next January. Law firm Blake Morgan has already agreed a lease for the top two floors.

All these new buildings will mean that the Millennium Stadium is almost completely hidden from view from the station, which is a bit of a shame. One building from which residents could almost watch matches (if the stadium roof is open) is a proposed £85m residential tower on Park Street, which would be Cardiff's tallest building.

A 'Millennium Walkway' (original name, this) will be a grand avenue towards the Taff, inviting pedestrians en masse toward the stadium from the piazza in front of the station.

"Currently, this part of Cardiff city centre doesn't give the best impression, and our aim is create a place that the people of Cardiff are proud of and one that leaves a lasting impression for visitors," said Phil Bale. But does Cardiff need a million square feet more office and retail space? TheFinancial Times has referred to Cardiff as being an essential near-shoring hub for the City of London, and will become even more attractive when mainline electrification cuts travel time to 100 minutes, so maybe the former will come in handy.

The station itself, which currently receives 13 million passengers annually, is due for an overhaul to cope with a predicted rise in demand to 32 million by 2043. Enclosing the original frontage under a wavy roof, a retail mezzanine floor and a new car park are included in plans that Network Rail Wales is considering. 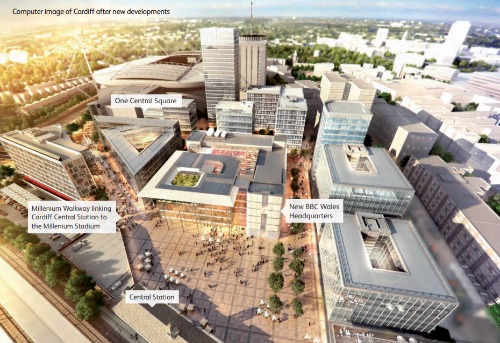 As part of its plan to become one of the world's top 100 universities, ambitious Cardiff University is looking to build a £300 million extension to its campus along Maindy Road in Cathays. It will sit alongside the recently-built £30 million Hadyn Ellis Building, a state-of-the-art cancer and mental health research centre, on former industrial land next to the rail line. Read more on this in our article on pages 14 & 15.

The innovation campus will feature the world's first social science research park, an innovation centre to assist start-ups in the wider community, a facility that would seek to find real-world applications to academic research, and an institute for compound semiconductor technology.

If you've been down Dumballs Road recently, you'll see the curved symmetrical lines of the £45 million campus of Cardiff and Vale College (CAVC) at Canal Parade. It will feature a gym, spa, conference centre and rooftop restaurant. Formed by a merger of Barry College and Coleg Glan Hafren, CAVC has been given a £20 million grant from Welsh Government to develop the site which lies within Cardiff's 140-acre Financial Enterprise Zone.

A major £500m plan for Dumballs Road is to transform 33 acres of land along the Taff into a new 2,070-home community of flats and townhouses, complete with shops and hotels, retail space and a school. Affordable housing would make up just 12 per cent of the wholly private Cardiff Embankment regeneration programme by developer Bellerophon.

Another development in the Financial Enterprise Zone is a proposed 23-storey apartment scheme of 180 flats in development firm JR Smart's Capital Quarter on Tyndall Street. Just south of the rail line, the new office buildings in this scheme have mostly already been let, including the 76,000 square foot No.1 Capital Quarter building which was acquired by Welsh Government. A 300-space car park already has planning permission at Capital Quarter, and a 580-bedroom student accommodation complex is also planned.

Celtic Manor intends to build a £70 million state-of-the-art convention at its Newport site, if it can get through local planning – something the hotel has famously found difficulty with in the past. The centre, with a 4,000m2 exhibition hall, could provide 150 permanent jobs and bring £50m into the region annually.

In Cardiff Bay, there are signs are that the £400 million International Sports Village will one day be complete, but don't hold your breath. Work on the Ice Arena Wales (IAW) has picked up again, though delays caused by initial slow sales on the neighbouring Cardiff Pointe residential site mean it won't be open till the end of the year, developer Greenbank has said. The £16 million future home of the Cardiff Devils will be Olympic standard and have two ice pads, including a 3,500-seater main rink. A real snow ski centre with hotel will complete the winter sports complex, while the £200m Cardiff Pointe development also plans two 'cantilever' tower blocks of 23 and 27 storeys.