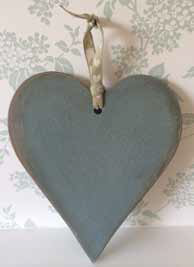 Cardiff's getting crafty. Learning a craft, using traditional skills, upcycling, and taking a more hands-on approach to things has never been more popular. Christian Amodeo finds out where you can get creative and make a few friends into the bargain.

It may be in part recession-inspired (or required) making do, a reaction to modern living in which things are discarded rather than mended, born of a love of vintage, a desire to learn new skills, or to make new friends, but one thing's for sure - handicrafts and people's desire to have a go at them is experiencing a resurgence. Whatever takes your fancy, the chances are there's a course or group offering it nearby (not to mention a dedicated magazine and numerous websites).

"I think renewed interest in sewing began when the recession first hit, with sewing machine sales reported to have increased ten-fold," says Angela McKenna of Venn Tailoring in Canton. "It's likely people thought they would save money by doing their own alterations and repairs, or perhaps turn their skills into extra cash by selling their creations at craft markets, which have also increased in popularity. It’s fantastic to see people embracing traditional skills again, and I'm sure TV programmes like the Great British Sewing Bee have played a part."

A former Slater Menswear tailoring manager whose sewing career started in 1982, Angela founded Venn Tailoring in 1999 to offer high-end garment alterations. Her clients include celebrities, the Ministry of Defence, the USA Ryder Cup team, and she is currently the official tailor to the England and Wales rugby teams.

For the past three years, the public have been able to glean knowledge from Angela through a range of sewing courses, including sewing skills, dressmaking, pattern cutting, craft items and soft furnishings. The main inspiration behind opening a sewing school, she says, was her struggle to find a skilled worker to train. "Sewing just wasn't being taught very much, if at all. Not even at a basic level."

In order to open a sewing school, Angela went back to school herself in order to qualify as a teacher, then worked part-time for 18 months at Newport University as a visiting tutor on the fashion design degree course. The leisure courses she's offered for the past three years have been "very successful", she says, but her aim remains to one day offer accredited courses too.

"One of the benefits of being an independent school is that I can respond instantly to demands," says Angela. "I don't mind testing the water. Student request has been an excellent steering tool - next year there will be three more new courses because of it."

All sorts of people, of all ages, take Venn courses - in addition to the many fashion students and textile teachers wanting to brush up or acquire new skills. One in ten attendees are men, Angela estimates. ("They are generally really good.")

"I can't say for sure why my students really enjoy learning from me, but I imagine my experience and knowledge gained from over 30 years experience must have something to do with it," says Angela. "I like that most students come with their own creative ideas. I really enjoy helping them gain the skills to bring their ideas to life." 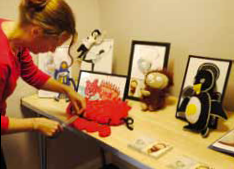 The brilliantly-named Calon Yarns in Canton is probably the city's best known knitting and crocheting hub. In addition to being a wool shop, six resident tutors offer a range of workshops and classes for both adults and kids. Yes, it seems children are just as into crafting as grown-ups.

Deborah, who also runs Cwtch Club, a service that brings drawings to life in the form of fabric 'softies', recently set up ZAP Upcycled with her friend Melanie Hobday, to run "fun and snappy skill-share workshops" for people of all ages and abilities to reuse and recycle existing clothing. The talented pair show attendees how to make use of existing clothing with found and foraged fabrics, haberdashery and various creative techniques.

Although it can be an insular activity, needlework and other crafts offer the opportunity to make friends, and in some cases even influence people.

"It's much easier to learn from someone in person rather than from a book or YouTube," says Sian Lile-Pastore, who works in the education department at St Fagans Museum. "It's also great to be able to share ideas and projects. If you get together with a group of people you've never met before (which may be the case at your first craft club), then it could be difficult to start up a conversation, but if you are making something you can chat about that."

Part of Sian Lile-Pastore's work is creating and delivering art activities for families who visit the museum. To extend the reach to adults, Sian set up a quilting club in 2010, inspired by the museum's huge quilting collection, as well as holding a regular knit and sew group, among other free crafty get-togethers.

"For our initial meeting we had two people attend, but it has grown so that on average we have about 15 people taking part, with about 30 on our database," Sian told us. "Many of the people who come to our craft clubs have made good friends so they meet up outside of the sessions too."

Sian's craftiness doesn't stop there. Inspired by a workshop run by Sarah Corbett, founder of the London-based Craftivist Collective, Sian and her friend Sara Huws founded Cardiff Craftivists in order to increase social engagement, make statements on issues important to them, and to protest against social injustice.

"If you are cross-stitching a message - which is a lengthy process - it gives you time to really think about the message or the ideas you want to get out there." 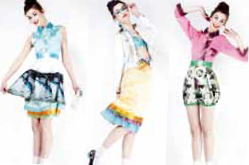 The pair have recently started a new Craftivist project making mini suffragette banners on which they cross-stitch or embroider the names (or stitch the portraits) of women who have inspired them. "We want to make hundreds of them and bring attention and recognition to amazing women all over the world," she says.

Another local guerilla crochet outfit - and a far more secretive one - whose work you may have spotted in the summer at Mermaid Quay (they dressed John Clinch's Tiger Bay couple and dog statues in bright crocheted shorts, bikini and accessories), is Welsh Woolly Wo(men).

The yarnbombing group, which changed its name when a man joined their ranks, is led by a 60-year-old woman. Speaking anonymously to WalesOnline, she said that the activity had changed her life. “It’s been a lifeline to us ... I'm going to become an art student in September. I don’t know if I would have had the confidence without the group.”

"I think Cardiff has become more crafty," says Emma Rees, who started upcycling and craft while in her final year at the university of Northampton studying textiles for fashion. "There are certainly a lot more places to go to explore and have a go at craft, as well as markets where you can buy one-off gems. It's great that so many people are having a go, and trying new things."

Emma's company, REtrose, offers an ethical fashion and textile range "that's contemporary but with a kitsch retro feel". All of its products - which has recently extended beyond clothing to prints and home furnishings - are made to order and unique.

"Cardiff Open Art School offers some great courses if you want to learn new skills," she tells Cwtch. "If you're looking for more of a social gathering, there are always things on at Chapter and The Gate. There are even coffee and tea shops venturing into craft - I live just across the road from ARTea in Victoria Park. It has some great events on, and the PrintHaus in Canton runs some really good classes for beginners as well as the more advanced."

Cardiff Open Art School, based at the Cardiff School of Art and Design in Llandaff, offers courses on everything from ceramics and printmaking to 3D printing and computer-based design. With so much on offer here and across the city, what's your excuse for not trying out a new activity? Who knows - one day we may see your creations in Roath's Oriel Makers Gallery, or even Craft In The Bay.

And craft is certainly a thriving business. At the end of October, Cardiff is host to Made By Hand, a three-day contemporary craft fair at City Hall, which will feature 135 artists and makers, as well as a series of informative and hands-on workshops as well as live demonstrations. A wealth of inspiration and talent all in one place.

"Anyone interested in sewing should bookmark The Sewing Directory. It's by far the best resource for all things sewing related." - Angela McKenna, Venn Sewing.

As a regulated estate and letting agency, we can help you find your dream home quickly. If you're interested in renting or buying a property in Cardiff, please contact the team at CPS Homes today.