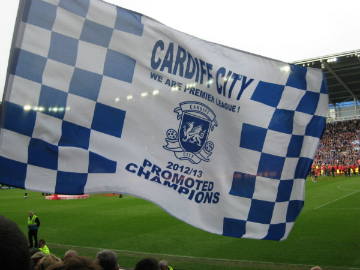 We assess what Cardiff City’s promotion to football’s top tier means for our capital city.

After years of near-misses and what ifs, Cardiff City fans rejoiced when the referee called time on their Charlton Athletic fixture on 16 April. Not only did he bring an end to a fairly drab encounter; his shrill whistle was music to the ears of supporters who’d suffered playoff disappointment and cup final defeats for many seasons previous. The one point earned in the draw meant City had finally made it to English football’s Promised Land, the Premier League.

From famine to feast – from August, the club will be once again dining at football’s top table with some of the game’s most prestigious clubs, including the likes of Manchester United, Liverpool, Chelsea and Arsenal.

Then there’s the hotly-contested South Wales derby against Swansea City. Next season will be the first time both clubs have been in football’s top flight at the same time. These are exciting times for both Cardiff and Welsh football in general.

First Division clubs broke away from The Football League in 1992 to take advantage of BSkyB’s lucrative television rights deal and create the Premier League. English football became a global brand overnight. Nowadays, the league is the most watched in the world, broadcasting in 212 territories to 643 million homes – that’s a staggering potential TV audience of 4.7 billion people.

Cardiff’s first season in the big time is expected to quadruple their revenue to around £80m. That’s not bad for a notoriously cash-strapped outfit. It’s also hoped that the worldwide phenomenon that is the Premier League will help lift the Welsh capital’s economy and its profile overseas.

If you’ve visited Southeast Asia, you’ll probably know that not many locals have heard of Wales, never mind Cardiff. Yet mention Ryan Giggs and it’s a whole new ball game (if you’ll excuse the pun). They’ll tell you where he’s from, for which team he plies his trade, and his position. That’s the reach of the Premier League – and it can only be a good thing for Cardiff.

Birds of a different colour

The Bluebirds’ Malaysian owner, Vincent Tan, recognised the ‘sleeping giant’ status of the club when he took over in 2010. As well as investing several million pounds to keep the club afloat and stave off looming debtors, he also me made the controversial and widely-criticised decision to change its colours from traditional blue to his preferred red.

Introducing a larger Welsh dragon to the club’s badge whilst reducing the size of the long-standing bluebird, he defended the move by stating it had been done with the profitable Asian market in mind, where the colour has strong spiritual significance. (Red symbolises wealth and fortune, whilst blue represents death.)

The club’s promotion will represent good fortune for the rest of Cardiff, according to the council’s economy chief, Russell Goodway, who likened the club’s achievement to the city winning the EuroMillions.

“We know that promotion to the Premier League brought over £58m and 400 jobs to the Swansea city economy,” says Goodway. “Given Cardiff’s role as a capital city and an established visitor destination, particularly for sports fans, we can expect the impact to be even bigger here.

“Premier League football will expose our city to worldwide television audiences and provide significant opportunities to promote economic development and tourism messages, not just for Cardiff, but for the whole of the country.”

Some experts are predicting that the promotion could generate up to 3,000 new jobs and £120 million for the Welsh economy. What's certain is that the city’s hospitality industry will enjoy an uplift in trade when the new season kicks-off, with hotels, restaurants and pubs feeling the benefits first-hand.

There's no doubt about it. This sleeping giant has awoken.

How will the property market be affected by Cardiff City’s promotion?

With the newly-created jobs not expected to pay high-end salaries, it’ll mean more activity in the lettings market as opposed to sales. More jobs will increase the demand for accommodation, so landlords should expect to see a rise in the number of prospective tenants showing an interest in their properties.

Fans typically begin their pre-match routine in the city centre before descending on Cardiff City Stadium in Leckwith as kick-off approaches. This means areas such as Canton, Cathays and the ever-popular Cardiff Bay are expected to benefit most from the promotion.

Meanwhile, short-term and weekend lets are expected to become more popular, with visiting fans, directors and executives wanting to sample the city's atmosphere for more than just a few hours on matchday.

There are plans for 45,000 new Cardiff homes to be built by 2026 and arrangements are in place to massively enhance the city's transport systems. CPS Homes give regular updates on the Local Development Plan, stay tuned to our blog.