The Renting Homes Wales (2016) Act arrives 1st December, but what does it actually mean to landlords?

The Renting Homes Wales (2016) Act arrives 1st December, but what does it actually mean to landlords? 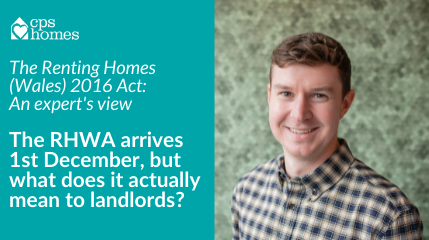 The expert's view: Landlord advice from our Director of Operations, Nikki Lewis...

To help answer that question, it’s important to understand how we got here…

In 2011, under the Government of Wales Act 2006, Welsh Government gained the devolved power to create its own housing laws for Wales.

Also known as the RHWA, the Renting Homes (Wales) Act 2016 is Welsh Government’s biggest step yet towards Welsh-specific housing legislation.

Whilst it’s an extremely lengthy Act, the RHWA doesn’t repeal (annul/void) everything in the 9 iterations of the Housing Act. It repeals only certain legislation, based on the subject matter. It will take many, many years for Wales to come way from the Housing Acts entirely, if that is even their aim.

Handy to know:
Welsh Government will release the full list of legislative changes in June 2022.
Head on over to our dedicated Renting Homes (Wales) Act 2016 section to bring yourself fully up-to-speed on what you need to know to comply, or drop me an e-mail via nikki.lewis@cpshomes.co.uk.