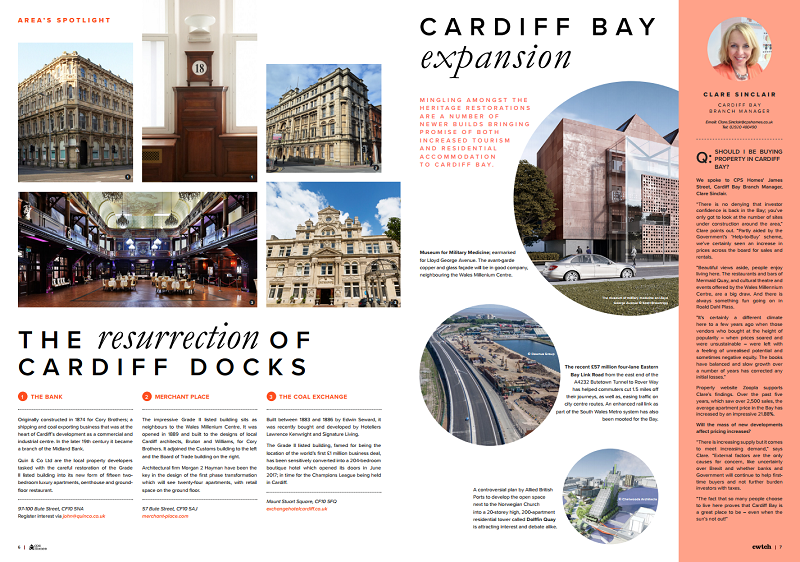 The resurrection of Cardiff docks

Originally constructed in 1874 for Cory Brothers; a shipping and coal exporting business that was at the heart of Cardiff’s development as a commercial and industrial centre. In the later 19th century it became a branch of the Midland Bank.

Quin & Co Ltd are the local property developers tasked with the careful restoration of the Grade II listed building into its new form of fifteen two-bedroom luxury apartments, penthouse and groundfloor restaurant.

The impressive Grade II listed building sits as neighbours to the Wales Millennium Centre. It was opened in 1889 and built to the designs of local Cardiff architects, Bruton and Williams, for Cory Brothers. It adjoined the Customs building to the left and the Board of Trade building on the right.

Architectural firm Morgan 2 Hayman have been the key in the design of the first phase transformation which will see twenty-four apartments, with retail space on the ground floor.

Built between 1883 and 1886 by Edwin Seward, it was recently bought and developed by Hoteliers Lawrence Kenwright and Signature Living.

The Grade II listed building, famed for being the location of the world’s first £1 million business deal, has been sensitively converted into a 204-bedroom boutique hotel which opened its doors in June 2017; in time for the Champions League being held in Cardiff.

Mingling amongst the heritage restorations are a number of newer builds bringing promise of both increased tourism and residential accommodation to Cardiff Bay.

Museum for Military Medicine; earmarked for Lloyd George Avenue. The avant-garde copper and glass façade will be in good company, neighbouring the Wales Millennium Centre

The recent £57 million four-lane Eastern Bay Link Road from the east end of the A4232 Butetown Tunnel to Rover Way has helped commuters cut 1.5 miles off their journeys, as well as, easing traffic on city centre routes. An enhanced rail link as part of the South Wales Metro system has also been mooted for the Bay.

Should I be buying property in Cardiff Bay?

“There is no denying that investor confidence is back in the Bay; you’ve only got to look at the number of sites under construction around the area,” Clare points out. "Partly aided by the Government’s ‘Help-to-Buy’ scheme, we’ve certainly seen an increase in prices across the board for sales and rentals.

"Beautiful views aside, people enjoy living here. The restaurants and bars of Mermaid Quay, and cultural theatre and events offered by the Wales Millennium Centre, are a big draw. And there is always something fun going on in Roald Dahl Plass.

"It’s certainly a different climate here to a few years ago when those vendors who bought at the height of popularity – when prices soared and were unsustainable – were left with a feeling of unrealised potential and sometimes negative equity. The books have balanced and slow growth over a number of years has corrected any initial losses.”

Property website Zoopla supports Clare’s findings. Over the past five years, which saw over 2,500 sales, the average apartment price in the Bay has increased by an impressive 21.88%.

Will the mass of new developments affect pricing increases?

"There is increasing supply but it comes to meet increasing demand,” says Clare. "External factors are the only causes for concern, like uncertainty over Brexit and whether banks and Government will continue to help firsttime buyers and not further burden investors with taxes.

"The fact that so many people choose to live here proves that Cardiff Bay is a great place to be – even when the sun’s not out!"