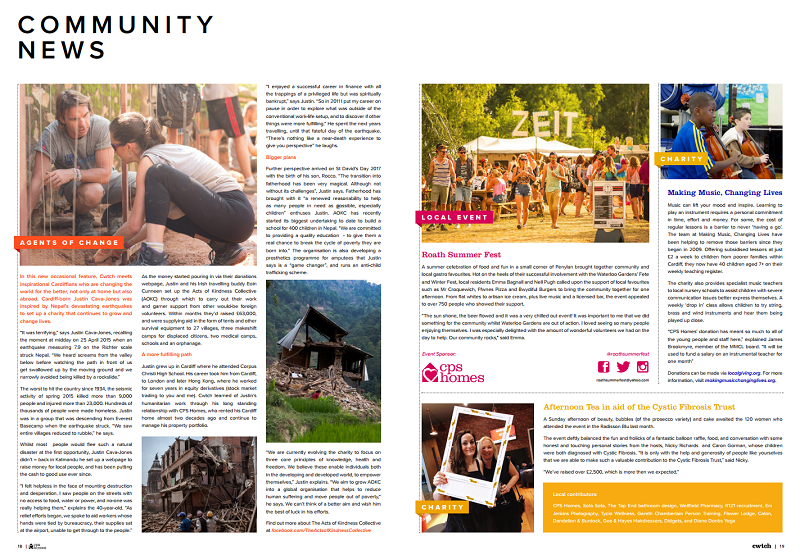 In this new occasional feature, Cwtch meets inspirational Cardiffians who are changing the world for the better, not only at home but also abroad. Cardiff-born Justin Cava-Jones was inspired by Nepal’s devastating earthquakes to set up a charity that continues to grow and change lives.

“It was terrifying,” says Justin Cava-Jones, recalling the moment at midday on 25 April 2015 when an earthquake measuring 7.9 on the Richter scale struck Nepal. “We heard screams from the valley below before watching the path in front of us get swallowed up by the moving ground and we narrowly avoided being killed by a rockslide.”

The worst to hit the country since 1934, the seismic activity of spring 2015 killed more than 9,000 people and injured more than 23,000. Hundreds of thousands of people were made homeless. Justin was in a group that was descending from Everest Basecamp when the earthquake struck. “We saw entire villages reduced to rubble,” he says.

Whilst most people would flee such a natural disaster at the first opportunity, Justin Cava-Jones didn’t – back in Katmandu he set up a webpage to raise money for local people, and has been putting the cash to good use ever since.

“I felt helpless in the face of mounting destruction and desperation. I saw people on the streets with no access to food, water or power, and no-one was really helping them,” explains the 40-year-old. “As relief efforts began, we spoke to aid workers whose hands were tied by bureaucracy, their supplies sat at the airport, unable to get through to the people.”

As the money started pouring in via their donations webpage, Justin and his Irish travelling buddy Eoin Cunneen set up the Acts of Kindness Collective (AOKC) through which to carry out their work and garner support from other would-be foreign volunteers. Within months they’d raised £63,000, and were supplying aid in the form of tents and other survival equipment to 27 villages, three makeshift camps for displaced citizens, two medical camps, schools and an orphanage.

Justin grew up in Cardiff where he attended Corpus Christi High School. His career took him from Cardiff, to London and later Hong Kong, where he worked for seven years in equity derivatives (stock market trading to you and me). Cwtch learned of Justin’s humanitarian work through his long standing relationship with CPS Homes, who rented his Cardiff home almost two decades ago and continue to manage his property portfolio.

“I enjoyed a successful career in finance with all the trappings of a privileged life but was spiritually bankrupt,” says Justin. “So in 2011 I put my career on pause in order to explore what was outside of the conventional work-life setup, and to discover if other things were more fulfilling.” He spent the next years travelling, until that fateful day of the earthquake. “There’s nothing like a near-death experience to give you perspective” he laughs.

Further perspective arrived on St David’s Day 2017 with the birth of his son, Rocco. “The transition into fatherhood has been very magical. Although not without its challenges”, Justin says. Fatherhood has brought with it “a renewed reasonability to help as many people in need as possible, especially children” enthuses Justin. AOKC has recently started its biggest undertaking to date to build a school for 400 children in Nepal.

“We are committed to providing a quality education - to give them a real chance to break the cycle of poverty they are born into." The organisation is also developing a prosthetics programme for amputees that Justin says is a “game changer”, and runs an anti-child trafficking scheme. “We are currently evolving the charity to focus on three core principles of knowledge, health and freedom. We believe these enable individuals both in the developing and developed world, to empower themselves,” Justin explains. “We aim to grow AOKC into a global organisation that helps to reduce human suffering and move people out of poverty,” he says. We can’t think of a better aim and wish him the best of luck in his efforts.

Find out more about The Acts of Kindness Collective at facebook.com/TheActsofKindnessCollective