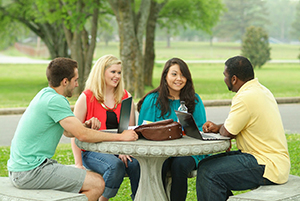 It’s that time of year again, when students start returning to universities across the country to either begin or resume their course(s), and according to new figures from UCAS, it looks as though more Welsh students will be attending university than ever before.

On 24 August 2015, UCAS revealed that, up to that date, 19,010 Welsh students had been accepted onto university courses across the country following this year’s A-level results, a rise of 2.4% compared to last year when 18,570 Welsh students were accepted. The 2015 figure is also much higher than that of 2011, when only 17,020 Welsh students were successful.

UCAS figures also revealed that 1,240 Welsh students had gained entry to a university in England and Wales through Clearing – a system which matches students who missed out on a place at university because they did not attain the necessary grades, with courses that still have vacancies. Across the UK, 46,800 students have been accepted through Clearing, which represents an 8% rise over last year, and is the highest number ever recorded by UCAS 12 days after the publication of A-level results.

So far, 487,330 students across the UK have been accepted onto a degree course, but this figure is expected to rise before the end of September.

It was revealed that Cardiff University is the only Welsh higher education institute that is not accepting any more students, as all places have been filled.

There are currently 139,870 students in the UK who are still eligible to be placed in a university through Clearing, a drop of 4% compared to last year due to the high number of students already accepted through the scheme. If you’re a student who doesn't have a confirmed university place, Clearing will remain open until September 21 2015, so if you want to attend university this academic year, you've still got time!

Are you studying in a Cardiff-based university? If so, congratulations, you’ll love the Welsh capital and all it has to offer! In the meantime, if you haven’t sorted out your student accommodation, we can help. Here at CPS Homes, we have hundreds of student properties available across many beautiful areas of Cardiff. Contact us today on 02920 668585, email: enquiries@cpshomes.co.uk, or pop into our local Cathays office for a chat with one of our friendly lettings team.