The 'Maindy' folds of Welsh innovation and research come to Cathays 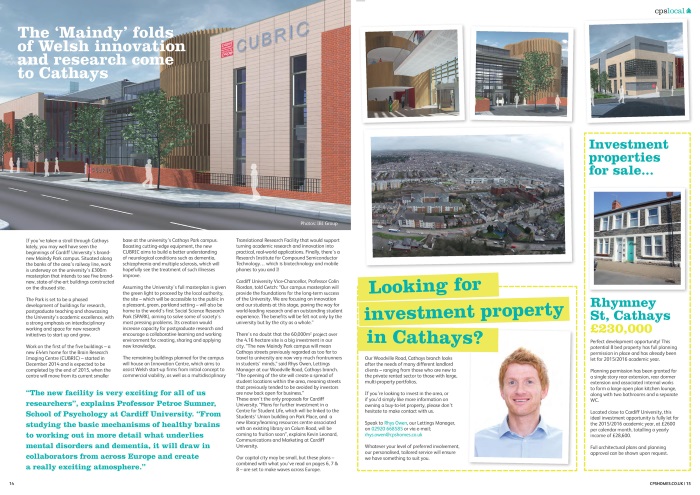 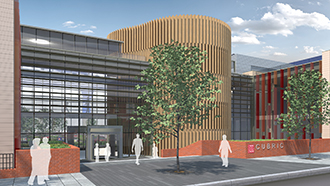 If you've taken a stroll through Cathays lately, you may well have seen the beginnings of Cardiff University's brand-new Maindy Park campus. Situated along the banks of the area's railway line, work is underway on the university's £300m masterplan that intends to see five brand-new, state-of-the-art buildings constructed on the disused site.

The Park is set to be a phased development of buildings for research, postgraduate teaching and showcasing the University's academic excellence, with a strong emphasis on interdisciplinary working and space for new research initiatives to start up and grow.

First phase to be completed by the end of 2015

Work on the first of the five buildings – a new £44m home for the Brain Research Imaging Centre (CUBRIC) – started in December 2014 and is expected to be completed by the end of 2015, when the centre will move from its current smaller base at the university's Cathays Park campus. Boasting cutting-edge equipment, the new CUBRIC aims to build a better understanding of neurological conditions such as dementia, schizophrenia and multiple sclerosis, which will hopefully see the treatment of such illnesses improve.

"The new facility is very exciting for all of us researchers", explains Professor Petroc Sumner, School of Psychology at Cardiff University. "We'll be able to advance on lots of different projects, from studying the basic mechanisms of healthy brains to working out in more detail what underlies mental disorders and dementia. There will be opportunities for students and senior staff alike to investigate things no-one else can. It will draw in collaborators from across Europe and create a really exciting atmosphere." 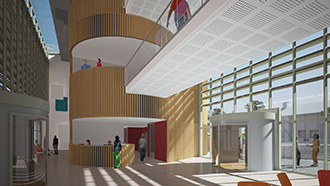 Assuming the University's full masterplan is given the green light to proceed by the local authority, the site – which will be accessible to the public in a pleasant, green, parkland setting – will also be home to the world’s first Social Science Research Park (SPARK), aiming to solve some of society's most pressing problems. Its creation would increase capacity for postgraduate research and encourage a collaborative learning and working environment for creating, sharing and applying new knowledge.

The remaining buildings planned for the campus will house an Innovation Centre, which aims to assist Welsh start-up firms from initial concept to commercial viability, as well as a multidisciplinary Translational Research Facility that would support turning academic research and innovation into practical, real-world applications. Finally, there's a Research Institute for Compound Semiconductor Technology… which is biotechnology and mobile phones to you and I!

Cardiff University Vice-Chancellor, Professor Colin Riordan, told Cwtch: "Our campus masterplan will provide the foundations for the long-term success of the University. We are focusing on innovation and our students at this stage, paving the way for world-leading research and an outstanding student experience. The benefits will be felt not only by the university but by the city as a whole." 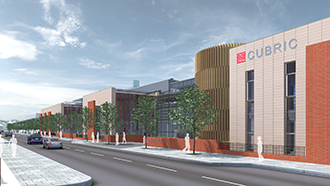 There's no doubt that the 60,000m2 project over the 4.16 hectare site is a big investment in our city. "The new Maindy Park campus will mean Cathays streets previously regarded as too far to travel to university are now very much frontrunners in students' minds," said Rhys Owen, Lettings Manager at our Woodville Road, Cathays branch. "The opening of the site will create a spread of student locations within the area, meaning streets that previously tended to be avoided by investors are now back open for business."

These aren't the only proposals for Cardiff University. "Plans for further investment in a Centre for Student Life, which will be linked to the Students' Union building on Park Place, and a new library/learning resources centre associated with an existing library on Colum Road, will be coming to fruition soon", explains Kevin Leonard, Communications and Marketing at Cardiff University.

Our capital city may be small, but these plans are set to make waves across Europe.