The housing market is a sellers' market 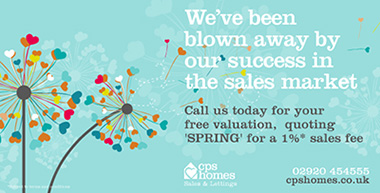 A little over 18 months after the Government was charged with the task of finding a way to get Britain's housing market moving again, it's now considering ways in which to halt the sudden boom that has seen house prices rise dramatically.

Reports show that the number of sales in Wales was up by 21% in the first three months of this year when compared to the same period in 2013, and house prices are at their highest level for more than five years, meaning the market is very much a sellers’ market at present.

Across our three branches, we've witnessed the upsurge in sales first-hand. With demand far outstripping supply, we've sold a range of properties at full asking price within a week of them being listed, with plenty of viewings and interest shown in between.

Low interest rates and lenders loaning as much as five times a person’s income mean buyers are queuing up; ready and waiting to pounce on the first property that fits with what they’re looking for.

But with the Bank of England concerned at the level of buyers taking out high loan-to-value mortgages, the boom may soon be diluted.

Indeed, the Government is already considering scaling back its ‘Help to Buy’ scheme, which was introduced in October 2013 to assist prospective buyers who can afford mortgage repayments but are struggling to raise a deposit.

Stricter mortgage rules brought into force in April 2014, which mean more scrutiny on what would-be purchasers spend their money on, also look set to have an effect on the sums of money buyers are able to borrow.

We’ll sell your home for just 1%

All things considered, if you’re thinking of selling, now is the time to do so. Not only are there a plethora of prospective buyers out there, but you can also benefit from our hugely discounted 1% sales fee. The offer won’t be around forever, and nor may the buyers.

To book your free, no obligation valuation, please call us on 02920 454555 or send us an e-mail via sales@cpshomes.co.uk. Alternatively, you can complete our online valuation form.