Cwtch up for our Warwick Davis interview 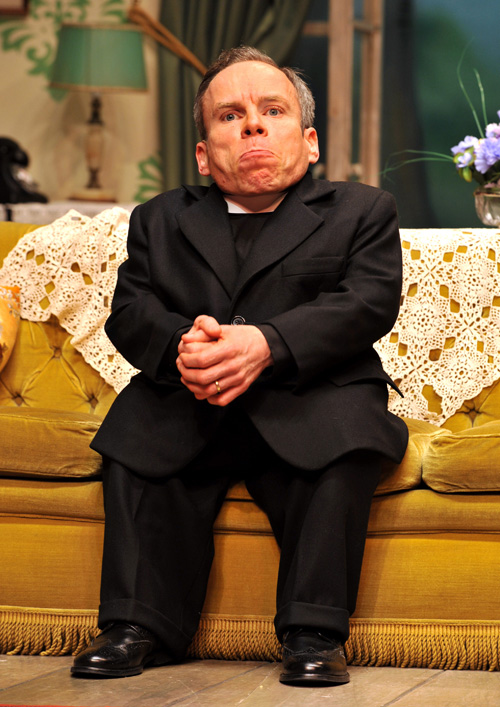 Warwick Davis is the star of Life's Too Short, Willow, and appeared in the Harry Potter and Star Wars films. We caught up with the 3ft 6inch-tall actor to chat about his new venture – a theatre company filled entirely with performers under 4ft.

Hi Warwick. Can you tell us how the Reduced Height Theatre Company came about?

The basic notion was that I wanted to be in a play. I enjoy the theatre, and though I've been offered many interesting and great roles in film and TV throughout my career, I've never been offered a play. At this stage in my career, I thought that perhaps the only way to be in one would be to produce it and cast myself.

What’s the thinking behind using only short actors?

I did an ITV documentary about the Ovitz family of Jewish entertainers who were sent to Auschwitz. Theirs is an amazing story, but what really struck me about them was that, while they were all short, they didn’t rely on this for their careers – they were all very talented entertainers. That was inspirational to me, and it’s kind of what I’m about: I don’t rely on my height to carry me through this business. It’s really about my skills and challenging myself.

I started thinking that there are probably lots of other short actors out there who also don’t get the chance to show what they can do. So this production acts as a platform to show their acting ability, because their size has no bearing on the role at all.

How have you found it?

It’s a huge amount of work - I underestimated just how much. I’m funding this tour too - there aren’t investors; I wanted ownership of it - so it’s certainly been a challenge, but one I’ve enjoyed. I want the show to be the very best it can be. Fortunately, I’ve had advice and partnered with a very experienced London producer, so I’m in safe hands.

Why did you choose to put on Philip King’s See How They Run?

I particularly enjoy the genre of farce, and felt that it was going to be challenging to produce it successfully. It’s about accuracy, pace and precision, and it demands quite full-on performances. It also harks back to a more romantic era. It’s lovely to go into a theatre, put your phone on silent, and escape from the modern world to a time when things were simpler. But then again, when you watch the play you realise some of the characters, such as mine (the Reverend Lionel Toop), have just as much stress as people have these days - but it’s brought on for very different reasons!

Do you ever find yourself star-struck by people you meet?

Yes I do. When I admire somebody’s work and respect what they do, I will be totally in awe. Like when I met Steve Coogan for the first time, because I’m a massive fan of Alan Partridge. And even now when I see him, even though I’ve worked with him, I’m really thrilled to see him. It was that way with Ricky [Gervais] and Stephen [Merchant] when I first met them. The same with Karl Pilkington even! I’d never actually tell him that, of course.

Karl is pretty grumpy and negative. Why did you agree to travel with him for An Idiot Abroad?

I happened to say to Ricky that Karl doesn’t appreciate how lucky he is, getting paid to see the world. Ricky (who knew how enthusiastic I am about most things in life) had the idea to send me to show him the positives. But Karl was too much even for me.

You both went through some pretty tough experiences. How much is playing to the camera?

All of it’s genuine. Nothing is set up. What happened just happened. You could never plan it. And that’s what’s so great - you get the sense that anything can happen, and usually does.

I think I’m a cool dad. I like to try to embarrass them but I don’t seem to achieve that. They’re pretty casual and unfazed about what it is I do and the people I get to meet. They’ve been able to meet their heroes, which they do get thrilled about, but generally they take it all in their stride.

How have you tried to embarrass them?

I threaten to take them to school wearing my pyjamas and things like that. They don’t seem to freak about it.

As an 11-year-old you played Wicket the Ewok in Return Of The Jedi. Is it true Mark Hamill (Luke Skywalker) completed your Star Wars figure collection?

Yes it is indeed. He asked me what toys I had, and then he asked what ones I’d like. I wrote a very big list. He was very, very generous because he brought in a big box with all the toys I wanted. I still have that collection.

What was it like to meet and work with your heroes?

It was an amazing experience to work with those guys. I didn’t see them for the people they were - they were always their characters for me. So Harrison Ford was actually Han Solo.

Are you going to be involved in the new Star Wars films?

I’ve dropped a lot of hints in the hope they might call on me, but I don’t know yet officially. All I ask is for a small cameo, then I would have had a small part in all three of the trilogies. 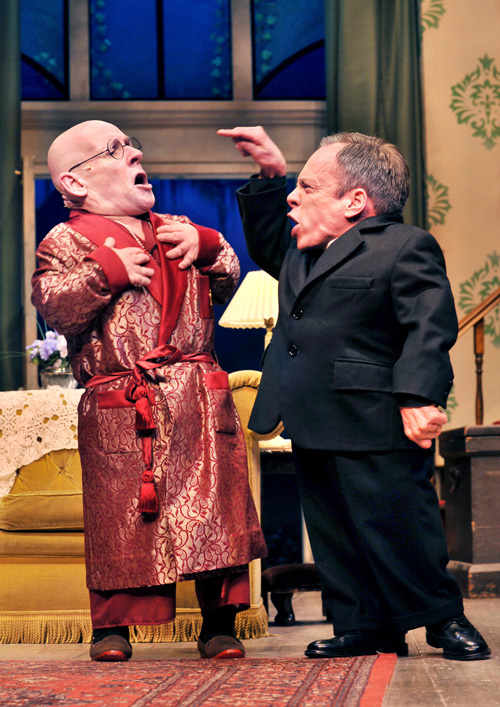 How do you spend time away from set and stage?

We like to go camping. We’ve got a new model VW camper van, which is probably the favourite thing we have. It’s nice to get away from it all.

Do you visit Wales with it?

Yes, and we’ll be bring it to Cardiff when we visit in May. As a kid I’d always go camping in Wales with my mum and dad in our caravan. We used to love to go round the castles - you have so many of them.

Are you looking forward to visiting Cardiff again?

I am. Normally when I’m in Cardiff it’s to do filming – I’ve done Doctor Who down there, and Hitchhiker’s Guide To The Galaxy was filmed in a quarry near Cardiff.

As for future plans, are there other plays you want to do?

I’d like to do a Reduced Height Theatre Company version of Spamalot. I debuted in the West End with it myself and had a great time working on it, so I think that would be fun. The world’s our oyster, I suppose.

See How They Run is on 6–10 May at The New Theatre, Cardiff.