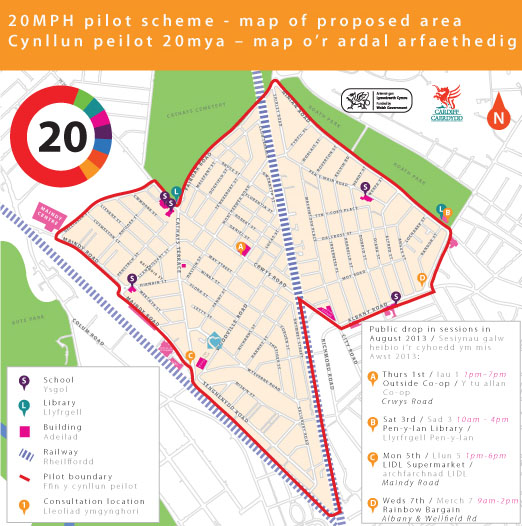 This news item will please mostly cyclists who find it dangerous to cycle in Cardiff: 20mph speed limits are extremely likely to be introduced in parts of Cardiff. The areas concerned are currently in Cathays (including the busy City Road) and Roath (Plasnewydd to be precise), but there could be more in the future if this pilot scheme proves efficient.

Why a 20mph speed limit?

The 20mph scheme is funded by the Welsh Government as part of the Safer Routes in Communities programme. This programme funds works to improve crossings, footpaths, cycle paths, and traffic calming measures, in order to improve safety for pedestrians and cyclists and make travel in the city sustainable.

Reducing the speed limit to 20mph would hopefully improve road safety and decrease the number of people killed or injured in road traffic accidents.

Motorists will have a chance to show that signs are enough to enforce speed limits in Cardiff, as the pilot scheme will be a signs-only one. This means no extra road humps, roundabouts or traffic lights, but no one said what would happen if signs weren’t enough to reduce speed in the city.

For more information you can visit the Keeping Cardiff Moving website with a map of the proposed area for the pilot scheme, an FAQ section to answer your questions, and, most importantly, dates of the public consultations held for Cardiff residents to have their say.

If you live in Cardiff, whether you’re a tenant or a home owner, you’ll certainly have a point of view on speed limits, so now is the time to share your thoughts during a public consultation. There is an online survey that you can fill in to say whether you think introducing speed limits is a good idea, and which areas of Cardiff would benefit from it; if you have Twitter you can follow @Cardiff20mph, and if you prefer face to face interaction there are drop-in sessions being organised.

Cardiff residents have until 12th August to share their views on the 20mph pilot scheme, and if it is approved by the public, the scheme could be implemented around March 2014.

What do you think about this 20mph speed limit scheme? Share your thoughts with us in the comments below, or join us on Facebook, Twitter or Google +!