All the fun of the fayre | CPS Homes

Putting the fun in fundraising at Marlborough Primary School 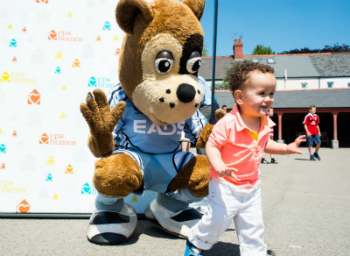 We recently used sponsorship of Cardiff Blues to lend a hand at Marlborough Primary School’s summer fayre and help them raise money towards their Playground Appeal. Even Derek from BBC Weather couldn't have granted us a sunnier day for the event!

With an ample choice of stalls to spend their pounds on, we watched arm-in-arm with Bruiser the Bear, the Blues mascot, as happy children enjoyed face-painting, a bouncy castle and coconut shy. Undeterred by the stifling heat, the kids made the most of the games on offer, whilst parents were kept refreshed with drinks aplenty, including the odd glass of Pimms. Well, it is summer, after all!

As for our stall, it was great to be able to use our relationship with Cardiff Blues to support a local cause. I think everybody who attended would agree that there's a genuine need to invest in areas of shade from the sun in the playground. 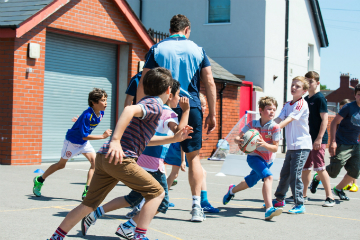 We thoroughly enjoyed meeting both children and parents, with one of our highlights being the arrival of the Blues players. Taking a break from the Bruiser the Bear passing board challenge, the children (and mums!) seemed thoroughly smitten - and not just with the players. Bruiser himself was very popular and he's told us he very much enjoyed posing for photographs and handing out balloons.

The Blues boys ran coaching sessions for the kids and were more than happy to lend their advice when asked. We'd especially like to thank the team of dads who really gave the players a run for their money in a game of atomic touch rugby.

Through our sponsorship of the Blues, we were able to secure some fantastic prizes for the raffle and games, including a signed rugby ball, tickets to see a home league game and - hot off the press - a signed shirt ahead of the new season. We’re particularly excited about the new strip, not least because we’re featured on the sleeve! 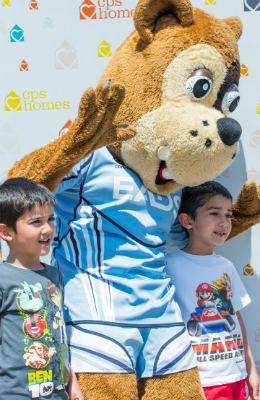 All in all, the fayre raised a huge £3,800 towards the Playground Appeal – a fantastic amount more than in previous years.

And now for the winners!

The Bruiser the Bear passing board challenge was won by Barney Soady of class 6MC, who threw all five balls through Bruiser's mouth. Well done! Barney will be receiving a ball signed by all four players from the day 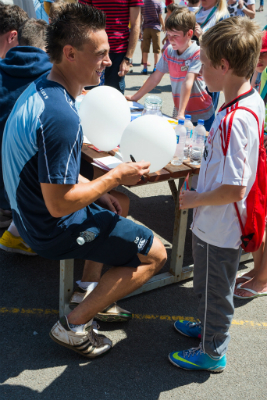 The raffle prizes of a personalised signed ball and a signed new shirt (officially released this Saturday) are Charlie and Dulcie Nightingale... and a John (surname being confirmed; - I'm sure you know who you are!). Both items will be signed when the players who took part in the recent Lions tour have had a well-earned rest and returned to training. Look out for both during the first week back at school.

Our final prize - tickets for a family of four to a home game of their choosing - goes to Jenny Isaacs. We'll see you at The Arms Park soon, Jenny!

Further congratulations go to all those who worked hard behind the scenes in the build-up and on the day, not to mention everyone who came to support the school on the day. We're delighted to have helped towards Marlborough Primary School's Playground Appeal.

We can’t wait for next year!

If you would like to see more photos from our day at the Marlborough Primary School fayre, they are available on our Facebook and Google+ pages.