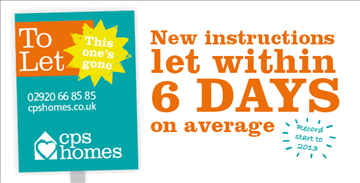 We’ve calculated that over the past year we’ve let newly-instructed properties within six days of being asked to market them – a hugely impressive average turnaround time.

In the last quarter alone we let over 330 properties, which works out as over as five units per day – not bad for a period which included a two-week closure for Christmas and New Year!

Our Cardiff Lettings Manager, Rhys Owen, said: “We enjoyed a hugely successful 2012 and 2013 has started in very much the same vein.”

“We’ve got a large number of pre-vetted tenants just waiting for the right property to come on the market. They’re ready to move in – it’s just a case of finding them the right place”, Rhys explained.

The speed at which we let properties has meant disappointment for many prospective tenants, with pre-booked appointments having to be re-arranged due to others already reserving the houses or flats they intended to view.

“Quite often people aren’t able to take time off work during the week, so they book in for the weekend. But by the time it comes around, the place they wanted to look at has been taken by somebody else”, Rhys continued.

“We never just remove an applicant’s details from our database. Just because we haven’t got anything to show them at that time, who’s to say we won’t take on something suitable the following day? By keeping in touch with everybody on our books, we know exactly who’s still looking and the sort of thing they’re after, so it’s a simple case of calling them when we have a property that matches their criteria and arranging a viewing”, Rhys concluded.

If you’re a landlord with a house or flat falling empty sooner rather than later, we urge you to get in touch as soon as possible with a view to arranging a free, no obligation lettings valuation. We’re confident that we’ll fill it within a week of being instructed.

To find out how CPS Homes can help you, give us a call or pop into one of our branches for a coffee!

Alternatively you can Request a valuation now via our online form!