We've got the January Blues! And we're loving it! 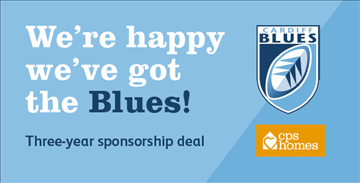 We’re delighted to announce that we’ve agreed a deal to become official sponsors of Cardiff Blues from the beginning of the 2013/2014 season. In what we believe is a big step to introducing our new-look brand to the city masses, the arrangement will see our name displayed prominently on the right sleeve of all replica and retail jerseys for the next three years.

Commenting on the partnership, Emma James, a CPS Homes Director, said “I don't think there was a single 'no' in the office when the idea of sponsoring the Blues was put forward. Many of our staff are already season ticket holders and we’re genuinely excited to be supporting the team we all so often cheer for. Fingers crossed the new shirts will bring them some good luck!”

In addition to the shirt sponsorship, you’ll also see us on several advertising boards around the Cardiff Arms Park pitch, as well as on match tickets and every match-day programme.

Matt Church, Cardiff Blues’ Sponsorship Manager, said “I used to work with Emma and Barrie at CPS Homes, so as a local, family business I thought they would be interested in supporting their local club. It’s fantastic to secure their support for the next three seasons. We are delighted that they have decided to get involved at such a high level, particularly given the current economic climate. It is real testament to the hard work CPS Homes put in and their positive outlook. We look forward to working with the entire team and building on our current relationship.”

A selection of the Blues’ star players, such as Welsh internationals Sam Warburton and Leigh Halfpenny, will be joining us to help launch the partnership as the season nears its start.

And to help celebrate the arrangement we’ll be running a variety of competitions and giveaways in the coming months, with prizes such as match tickets, signed shirts and signed rugby balls. Stay tuned to our Facebook page – www.facebook.com/CPSHomes - for information as and when we announce it.