Back
Splott is central, grounded and earthy. Unlike some of the newer sections of the city, Splott has personality.

The Splott district is served well by Cardiff Bus routes. For the Newport Road side there are frequent services that can get you close to Broadway. If you need to get deep into land of Splott then there is the 11, 12 and 13 service that will save the legs.

There is no train station in Splott. The city centre is a 5 - 15 minute walk away. Your nearest train station would be Queen Street.

The A4161 road or Newport Road is minutes away and can get you from Splott onto the M4 corridor within 5 minutes. From there you can be within London in 2 hours - that’s if you wish to leave The ‘Diff!

What's on in Splott

Location: Splott Park , Muirton Road , Cardiff
If you need a quick-fix break away from the city rat race, this park could be just what you need. Right in the heart of Splott is… Splott Park. It may not be the most popular of Cardiff Parks or have the most adventurous of names, but by no means is it inferior. Surrounded by a thick blanket of mature trees, the park is home to a skate park, mountain bike track, tennis courts, bowling green and even a swimming pool located in the centre of the park. So there are plenty of activities to keep your blood pumping. Just in case you fancy a more leisurely stroll, there are plenty of nice benches to take a cheeky rest - don’t want to pull something now do we….

Location: Splott Road , Splott , Cardiff , CF24 2BZ
The new Better STAR Hub opened its doors in September 2016 and now proudly sits at the heart of the Splott, Tremorfa, Adamsdown and Roath communities. This state of the art facility includes a new swimming pool with completely accessible access for all users. Facilities include badminton courts, indoor 5 a-side, a fitness suite and the catalyst for most Olympic athletes - soft play.

Location: Ocean Park , Ocean Way , Cardiff , CF24 5HF
The gym is pushing the boundaries for being classed as Splott or Adamsdown, but this is a first class fitness centre that’s only an easy cycle, jog or post-workout limp away. The centre boasts a swimming pool, weights and fitness room, café lounge, tennis courts and a spa area for relaxing at the end of it all. 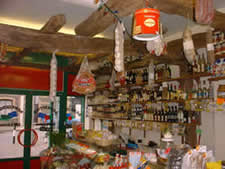 Location: 15 Splott Road , Cardiff , CF24 2BU
Deep into the centre of Splott – not far from Adamsdown – is a taste of the Mediterranean. Benedito’s is a shop that supplies a tasty mixture of the best foods and drinks from sunny Portugal. They also run the Imperial Café just down the road from Benedito’s - a nice spot in the centre of Splott. Benedito's is a deli which offers “An excellent place to shop for unusual food. They are one of the few places in Cardiff that does good salt cod,” says Chris Hayden who moved to Splott 11 years ago.

Location: 33 Splott Road , Cardiff , CF24 2BU
Known as Joe’s or Maria’s to locals, tuck in to a fantastic all-day breakfast…served all-day! You’ll be sure to leave feeling as full as an egg!

Location: 200 Broadway , Cardiff , CF24 1QJ
One of the last pubs left in Cardiff with true tradition; a wide range of classic Brains beers are served here, all within a cosy atmosphere. Bask in the sunshine in the large beer garden during summer, or alternatively use the gym upstairs! The Royal Oak is such a good pub that other Cardiff districts are trying to claim ownership: “Whilst geographic purists may argue about ownership – is it Roath or Splott? – leave them to the wrangling to enjoy a pint of Cardiff’s finest in one of the last true traditional pubs in the city,” says Splott resident Simon Nurse. 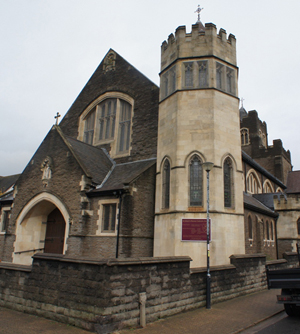 With a great location, sense of community and affordable housing, Splott is a perfect choice for first-time buyers. CPS Homes explores the changing fortunes of an iconic Cardiff district.

No other area of Cardiff – or many other British cities for that matter – has garnered as much national recognition, amusement and affection purely for its name. Splott is one you remember.

"The word Splott itself doesn't sound exactly beautiful – which may be why it was described to me as 'upper Bay' when I looking to buy here – but I like the fact that it sounds semi-comical, it reminds me of the splat guns in Buggsy Malone," says Chris Hayden, an insurance claims manager who moved to Splott as a first-time buyer 11 years ago.

As evocative and full of character as the place it describes, Splott, or Y Sblot in Welsh, takes its name from Old English for a patch of land, though some would have you believe it is derived from ‘God’s Plot’, it once having belonged to the Bishop of Llandaff.

While some might denounce it as more blighted than blessed, thousands of us know better.

"When I hear the name Splott it conjures up memories of old Cardiff streets, my lovely next-door neighbours and Chelsea buns from Brutons Bakery on Clare Road," says Gaby Jones, whose first house purchase was in Adeline Street.

Chris Hayden holds similar affection for the place. “Splott is so much better than it sounds,” he says. “I love living here. It isn’t as young and vibrant as say Roath, Pontcanna or the Bay, but I kind of like that. It feels like Cardiff as I remember it, and I like the diversity of the people that live here.” 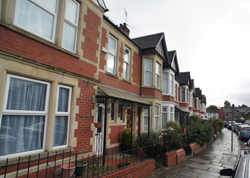 Now home to the Magic Roundabout, its famous eponymous market, an endangered swimming pool (how many of us learned to swim here?), and more than 13,000 Cardiffians, Splott was until the late 19th century farmland belonging to Upper and Lower Splott Farms, part of the Tredegar Estate.

Its swift transition in the 1880s into an impoverished working class community in a network of tightly-packed Victorian housing echoed the nearby expansion of Cardiff’s iron and steel industry which was hungry for workers.

Dowlais Steelworks moved to Cardiff and opened East Moors Steelworks in next door Tremorfa in 1891. After significant growth in the first part of the 20th century – by the 1930s the plant was capable of producing half a million tons of steel a year – the middle of the century saw a long, drawn-out decline for industry in Cardiff. The closure in 1978 of East Moors Steelworks saw thousands of job losses, but an end to hung-out-to-dry washing turning red from pollution.

Parts of Splott have been transformed beyond recognition. In the 1970s, 17 streets of homes were demolished, including streets Enid, Layard, and Menelaus. The successful football club Bridgend Street AFC, founded in 1899, is a reminder of another vanished Splott street, once full of homes, families and memories.

“I grew up in Splott, attending St Albans then Splott Road High,” remembers Joe Rocco Federico. “My dad had a hardware shop in Carlisle Street opposite Orsolini’s the grocer. In 1970 we moved to Llanishen. In 1974 we moved back to Splott, but boy how it had changed in that time.”

In more recent years, while other areas of Cardiff have seen significant growth or gentrification, changes in Splott have perhaps been a little more subtle.

“Splott has changed both little and a lot over the years,” suggests Simon Nurse, a cycling enthusiast, blogger and employee at Odoni Elwell, a cycle storage fabricators based on the edge of Splott.

“The area is recognisably Splott: rows of Victorian houses and quiet urban bustle, the distant sound of trains, a sense of being in the heart of the Welsh capital. Yet the area has also modernised (albeit slowly) with old hotels turned into prime housing and the gradual movement of professional people into the area.” 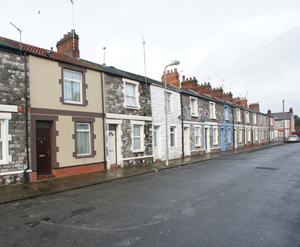 As hard as life was for Splott’s inhabitants in the past, there were few places with as strong a sense of community. Churches of various faiths, and social and sports clubs abounded. It seems this vibrancy and camaraderie is held in deep affection by almost everyone who has ever lived here.

“Splott means so much in so many ways,” says Salvatore Amodeo, who first knew it as a 13-year-old Italian immigrant in the early 1960s. “It was my first home in this country, in the shadow of the smoky and gritty steelworks. It was a real community, full of hardworking people. I will never forget the friendly welcome and the ease with which one made friends. It will always be one of my spiritual homes.”

This sentiment is echoed by Simon Nurse. “Splott is central, grounded and earthy,” he says. “Unlike some of the newer sections of the city, Splott has personality. It’s a place where people know their neighbours and there's a real sense of community – from the smiling teller at the NatWest Bank on Splott Road, to the ladies at Bruton's bakery on Carlisle Street who used to tuck away Welsh cakes for my lunch time treat.” 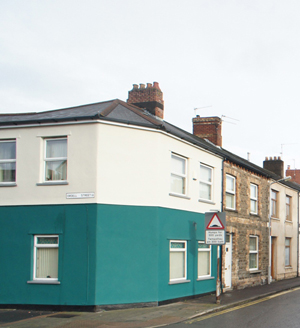 Splott offers those wanting to live close to Cardiff city centre an excellent opportunity. It’s but a 25 minute work to town or the bay, while Newport Road’s barn-like stores are just across the tracks.

Sally Pritchard, a local government data consultant, bought her first house in Railway Street in 2003. “A two-bed terrace with two reception rooms and plenty of space for a twenty-something, it was the second house the estate agent showed me and as soon as I saw it I knew it was ‘the one’,” she recalls.

Sally also considers prices and housing quality as significant attractions. “It needed no work at all and was much cheaper than similar properties in other areas of Cardiff,” she says. “I’ll always remember that when I had Sky installed, the engineer had to drill a hole through the wall of the front of my house. It took him hours. He said, ‘They don’t build houses like these in Splott anymore.’”

When after five years Sally decided to move on, her house was snapped up within a week. “I believe because the houses in Splott keep their value and are always going to be in demand for first-time buyers and young families,” she says.

“I will always remember my time in Splott fondly as it’s a brilliant place to live,” says Sally. “We’d be welcomed into random people’s houses on my street at 3am for drinks and dancing after a night out.”

It may not be fashionable or ‘on-trend’ (yet) by comparison to some areas of Cardiff, but for community spirit, a sense of place, convenience, and the odd impromptu house party, Splott is hard to beat.

Not a Splott of people know that...

CPS Homes last edited this page on 03/12/2019. All details listed were correct at the time of publishing. Reviewed every six months.