Back
Pontcanna is the 23rd coolest place to live
in the UK. Not bad for north Riverside, eh?

Location: Heath Park , Cardiff , CF14 4XW
Around a 9-minute drive from Pontcanna, or a 45-minute walk.

Pontcanna is served by the number 24, 25 and 63 Cardiff Bus routes. There are bus links to the city centre, Llandaff, Rhiwbina and many more destinations.

There is no rail station in Pontcanna. Pontcanna's closest train station is Llandaff station, which serves the areas of Llandaff North and Whitchurch.

Pontcanna is situated north and south of the A4119 and the A4232 handy for working out of the city. Furthermore, Western Avenue, which is a 5 minute drive from Pontcanna, serves as a quick link to the M4 and A470.

What's on in Pontcanna 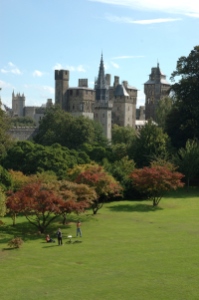 Location: Bute Park , Cardiff
Fancy some green, green grass of Wales? Yes please! The stunning park grounds at the heart of the city is the perfect picnic spot. Set within the grounds of the iconic Cardiff Castle, it's a perfect escape from the hustle and bustle of the city. Our top tip - grab lunch from one of the numerous shops around the Castle, and sit in the park watching the boats go by on the river. Who said a working lunch had to be boring?!

The Taff Trail is a gorgeous cycle and pedestrian walking route which runs alongside the river Taff, through the middle of Pontcanna fields, through to Bute Park in the city centre, and further down to Cardiff Bay. It truly is a lovely route for a day out with the family or a spot of exercise.

Location: 183A Kings Road , CF11 9DF
Kings Road Yard is a creative mews in Pontcanna, providing a number of workspaces. The courtyard is home to the renowned Kings Road Artists and a cluster of artisan establishments and creative businesses.

Location: 16 Severn Grove , Cardiff , CF11 9EN
This traditional pub offers the charm you would expect from a Pontcanna business. With a wide variety of entertainment including live music, pub quizzes and jazz, this bar has something for everyone.

Location: The Halfway , Cathedral Road , Cardiff , CF11 9PP
The Halfway is a classic tavern, offering an extensive food menu along with a range of award-winning ales.

Location: 185a cowbridge road east , Cardiff , CF11 9AJ
A lovely, modern Indian food experience. The head chef, Anand George, has had countless positive reviews for their spicy fresh and inviting menu. This restaurant also offers a takeaway option that is handy for all moods around food.

Location: 6-10 Romilly Crescent , Pontcanna , Cardiff , CF11 9NR
Heaneys is a chilled, relaxed bar restaurant situated in the heart of Pontcanna. Serving creative cocktails, extensive wines and sample or sharing plates to be enjoyed alone or between friends and family.

As one of the coolest places to live in the UK, it’s hard to say anything new about Cardiff’s most fashionable area. So we chatted to some Pontcanna locals to hear the truth behind the media hype. 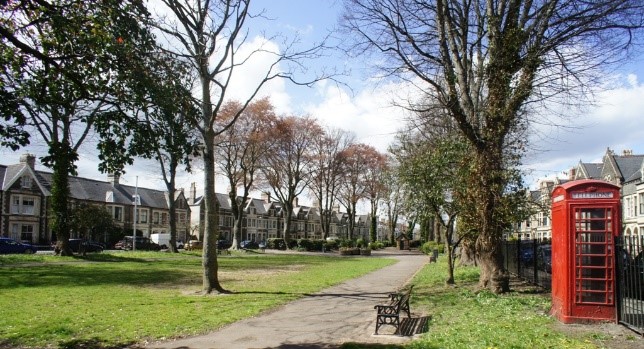 Tree-lined streets, beautiful architecture, independent retailers, parkland, proximity to the city centre, great restaurants, relaxed cafés, and a private members club (that anyone can drink in) – what more could you want from a neighbourhood?

Not a lot, it seems – except perhaps more parking (many a resident’s chief gripe). According to The Times, Pontcanna is the 23rd coolest place to live in the UK.

Certainly it’s true that 25 per cent of Pontcanna residents siarad Cymraeg (compared to Cardiff’s average of 11%), and it’s long been a natural home to those who work at the nearby BBC studios. One can regularly spot a TV personality or rugby star, and locals casually tell of watching Charlotte Church sing a capella in the Robin Hood pub. But we are here to discover what makes Pontcanna truly special by speaking to the local residents.

“There is a strong community spirit here – it has very much a village feel within a city,” says Pontcanna resident and dentist Dr Andrew Webber, who works at Cathedral Dental Practice.

Cardiff-born Andrew chose Pontcanna when resettling in Cardiff three years ago. “Having everything on your doorstep is one of the best things about it,” he says

“It’s a very sociable place to live. Jogging through Bute Park on a summer’s evening, then enjoying a cold lager outside one of the many local pubs, is a perfect way to unwind after a hard, working week.”

‘A village within a city’ is a phrase often used by residents. It may be a dynamic place, but there is both a sense of community and historical links, due perhaps to its relatively recent rural past. Indeed, its name stems from Pont Canna Farm, which probably took its name from a nearby bridge – pont is of course bridge in Welsh – over the Taff tributary, Whitehouse brook.

“A horse used to live in our front room,” jokes Kath Jenkins, a public sector professional and wife to Richard who we heard from previously.

These days the couple’s modern home, on one of Pontcanna’s tree-lined terraced streets, would not look out of place in an interior style magazine, but once the site comprised stables and access to an old bakery. It was a derelict house when they bought it in 2004, offering an opportunity to create their dream home in a location that otherwise may have been out of their budget.

The Pontcanna Pine site, also known aptly enough as The Dairy, sits on the cornerof Severn Grove and Kings Road, and has been the subject of a recent unsuccessful planning application. It’s the latest attempt at an incursion by chain supermarkets. So far they’ve been resisted. 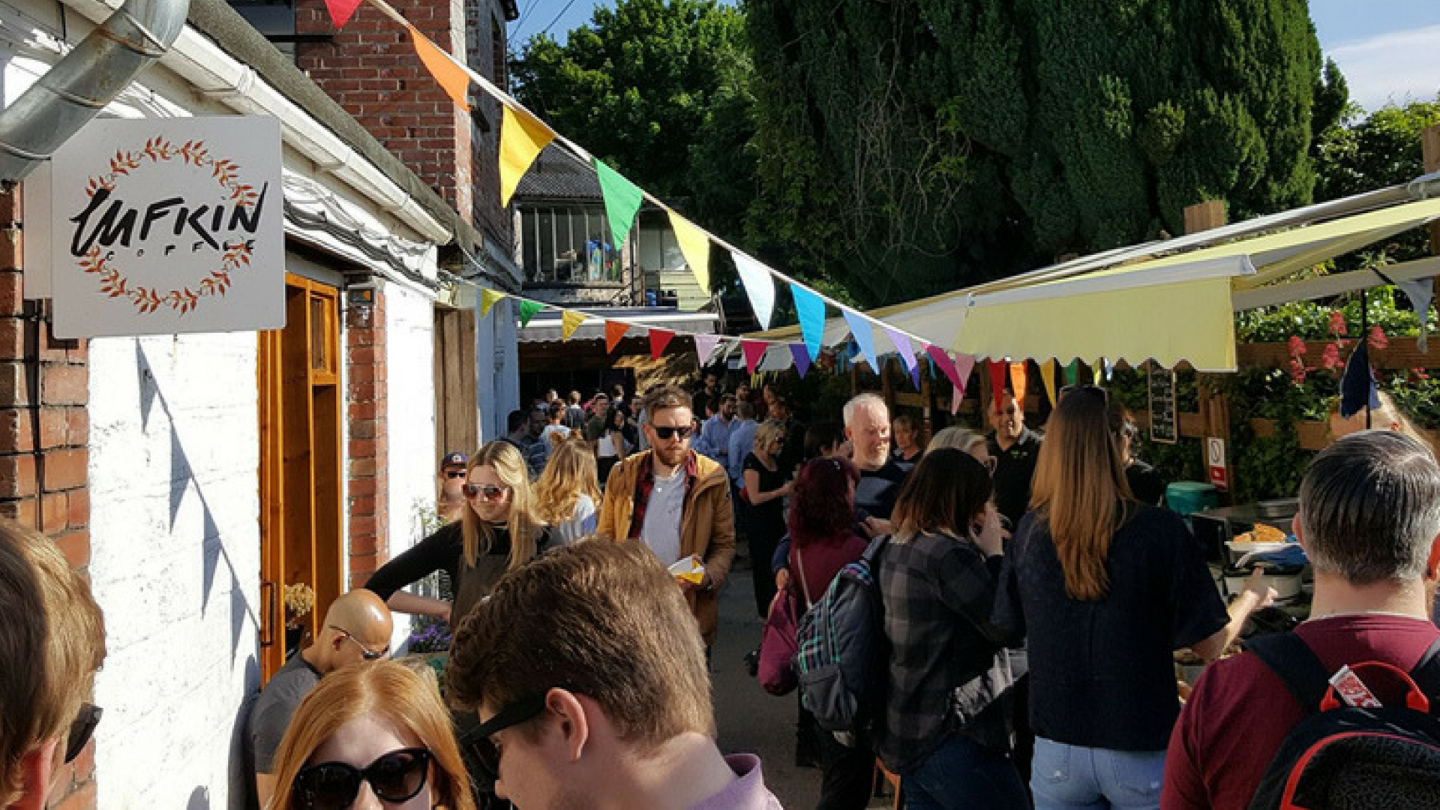 The array of independent shops, cafés and restaurants certainly enhance Pontcanna’s sense of place. “It is very nice to be able to get all the ingredients to whip up a pretty splendid meal entirely from independent traders on your doorstep,” says Kath.

Great British Menu’s Tommy Heaney left his eponymous restaurant at the Great House hotel in Bridgend last year to open his first solo venture, Heaney’s Cardiff, in Pontcanna. As part of the thriving independent restaurant, coffee and brewing scene in Pontcanna, there is also Milkwood, The Smoke House and Brava. Located next to Co-Op supermarket, the Kings Road Yard comprises a Microbrewery, regular pop up market and several local designer shops.

Not all changes are welcome: in spite of its Conservation Area status, Pontcanna will continue to be subject to more residential development, a natural consequence of high demand (and the vertigo-inducing property prices).

“Pontcanna is in danger of being overdeveloped in places,” suggests Kathryn. “Developers are looking to shoehorn as many flats as they can get away with into all available land. It’s a bit depressing because it often involves tearing down lovely old buildings.” 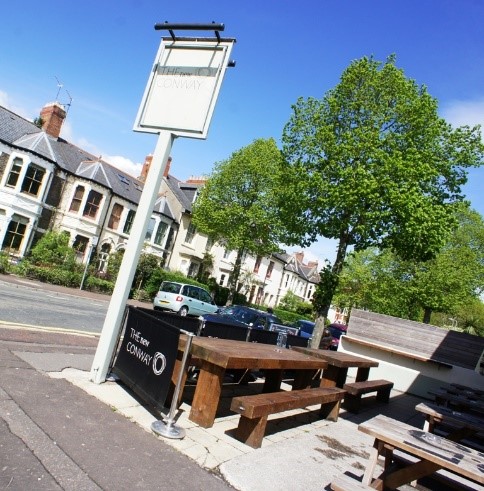 Yet while some Pontcanna pockets are certainly deep, chatting to regulars in the Brains-owned Halfway pub – a favourite of rugby legend Barry John, if you will –there is sometimes mention of the ‘Pontcanna pound’. It’s a light-hearted grumble about perceived inflated prices generally in the locality.

The unsung hero in Pontcanna’s celebrated status of the place to be is probably Canton. Rubbing up against the more rough and ready (some might say more real) area, with its bustling high street (and handy chains), allows Pontcanna to continue its village-like, gentrified existence.

There is also a sense that Canton helps keep Pontcanna’s feet on the ground. Or as one resident puts it: “Canton stops Pontcanna from vanishing too far up its own backside in a healthy, reality-check sort of way.”

Well, it tries at least.

CPS Homes last edited this page on 02/12/2019. All details listed were correct at the time of publishing. Reviewed every six months.